Since the US Preventive Services Task Force (USPSTF) gave prostate cancer screening a “D” grade in 2012, researchers have been looking for better ways to detect, diagnose and treat prostate cancer. Blood tests such as the PSA and imaging and biopsy tests, however, have lacked specificity, identifying cancer only about half the time, while missing clinically significant cancer.

Since that USPSTF grade was issued, overall screening has decreased resulting in a 7.5 percent decline in overall incidence rate of localized prostate but a 1.4 percent increase in metastatic disease at diagnosis, according to a study in the Sept. 2017 Journal of Urology.

At the same time a variety of studies have tested imaging, biopsy, and combinations of imaging and biopsy in an effort to improve specificity and increase the detection of clinically significant prostate cancer.

The results showed that a strategy of using mpMRI first followed by up to two MRI-targeted TRUS biopsies was more effective and cost effective than the strategy of TRUS first.

In discussing preliminary findings of PROMIS at the American Urological Association’s AUA 2017 meeting, Prof. Mark Emberton of the University College Hospital in London and co-author of the study proposed new imaging-based algorithm for diagnosis, treatment and follow-up for prostate cancer. 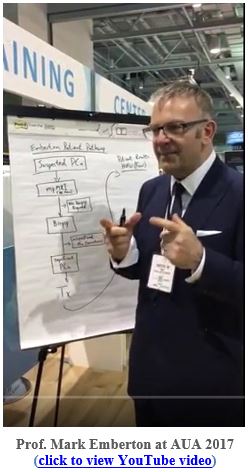 “The future may be that you’ll have an MRI with or without a PSA,” Emberton told SonaCare, “and if you have a really tiny lesion we watch it, if it starts growing you treat it, and that is the way we treat kidney cancers. With a small renal cancer, you watch, if it progresses, you treat it and increasingly we use ablative techniques to manage kidney cancers and obviously we have those in the prostate. So that’s the new pathway.”

He adds that this new proposed algorithm challenges urologists because it asks for expertise that isn’t traditionally taught, expertise in imaging, experience in guided biopsy to a defined target in a 3D spatial context and managing energy sources to selectively ablate tissues if you need to. The second challenge is that it replaces something that was simple and easy to do (a TRUS biopsy) with something that isn’t simple and easy to do, an image-guided biopsy that requires great skill and precision.

The MRI will segment the population into “normal” and “abnormals.” The normal subjects are reassured that their risk is very low, the abnormals go to biopsy. The more difficult patients are those in a gray zone, which needs more study to learn how to interpret.

A new checkpoint in the pathway he described is the discussion of the location of the lesion. Depending on the location, the patient may be able to be treated with selective ablation without having to remove the prostate.

Because location of the lesion is discussed early in the pathway, Emberton says the patient will already be prepared for focal therapy by the time he goes in for biopsy. In other words, if the MRI exam is showing a lesion the radiologist knows there is about a 90 percent chance that it will be clinically significant. At that point image guided biopsy and treatment with ablation can be performed at the same time, which is where the fusion mpMRI becomes both effective and cost effective. There is no need to have the biopsy and then schedule a treatment procedure.

SonaCare has prepared an infographic that shows the new screening/diagnosis, treatment and follow-up algorithm. If you’d like to hear Prof. Emberton’s presentation at AUA, visit the SonaCare YouTube channel.

To receive your copy of an infographic of Prof. Emberton’s pathway, click the button below.

LOCATE A HIFU SURGEON IN YOUR AREA.